Sports betting can be a considerably exciting form of gamble, with the unpredictability of sports in general plus the high paced and fluctuating odds. This got even more so when the Internet came along and gave the world, well, the world.

This meant games from all over the world to bet on, with wagers and pools collected from many more players, equalling considerably larger possible wins. It also meant easy access for the players who wanted a wager. But for all of this to happen there had to first be an online sports book to offer it all, and this is exactly what World Sports Exchange did for the emerging online world in the 1990s.

Founded by Jay Cohen and Steve Schillinger this online sports books helped set the tone for sports books of the nature to come. The World Sports Exchange ultimately closed its metaphorical doors for good however, after experiencing a couple of legal hiccups.

Born in 1968 in California, United States Jay Cohen went on to setup the World Sports Exchange online sports book which opened in 1995. Co-founding the online sports book with Steve Schillinger, the two operated the group well until the 24th of July in the year 2000. This is the date that Cohen, founder and CEO of World Sports Exchange, became the first United States citizen to be charged and finally convicted of violating the Federal Wire Act as per the U.S federal court. This was for operating an online sports book and gambling group within a legal and regulated jurisdiction, namely Antigua. 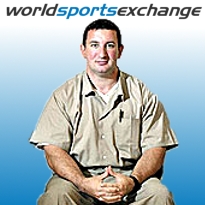 Despite appealing this to the Supreme Court of the United States, Jay Cohen was sent to jail for this deed and was only released in March of 2004. Essentially, despite the fact that this online sports book was operating from a place of legal jurisdiction, the Federal Wire Act of 1961 prohibits the spreading of gambling content and related services across state lines to where the act may in fact be considered legal. President J.F.K signed it into law in September of 1961.

A Little on the World Sports Exchange

So with Jay Cohen having helped co-found the World Sports Exchange and then not 5 years later be arrested for infringing on the Federal Wire Act, how did the online sports book itself survive after the ordeal. Well as it turns out the group still went on to operate as a sports book, offering players odds and lines on multiple different sporting platforms and events. They even operated an online Poker room called the World Poker Exchange, which offered some premium levels of this top card game.

Sadly however the World Sports Exchange was headed for collapse and in February of 2012 their World Poker Exchange closed for the last time. A year later the online site closed, leaving a message on their site inferring that they had insufficient capital to keep operating and were therefore forced to close down. On an even darker side, Steve Schillinger was believed to have committed suicide in his Antiguan home on the same day of World Sports Exchange closing those aforementioned metaphorical doors. A rather grim tale for Jay Cohen and friends.